Riding an electric scooter is becoming one of the best ways to travel to-and-fro if you’re living in the city or in an urban environment.

It’s light, easily maneuverable, and very cost-efficient as you don’t need to spend hundreds of dollars on fuel.

But you’ll easily get lost with all the many options out there, especially that numerous electric scooter companies popped out of existence- over the past years. Unfortunately, most of them create products which aren’t really of good quality.

Luckily, you’ve found this article because here, we’ll be showing you one of the best electric scooters you can get — the GoTrax XR Ultra.

We’ll talk about its features, pros and cons, as well as everything you need to know about it to see if it fits you.

A Quick Look on the GoTrax XR Ultra
The GoTrax XR Ultra is a great choice if you’re looking for an electric scooter that’s specifically designed for commuting. What makes them standout is that they are foldable and are light enough to carry around the city without compromising your looks.These can carry adults as well, so you don’t have to worry if you’ll arrive at your destination in one piece. In fact, it’s made for convenience and comfort, which makes it a useful transportation vehicle to go around town, whether you be going to the office, school, or run on an errand.
$399.99
Buy on Amazon 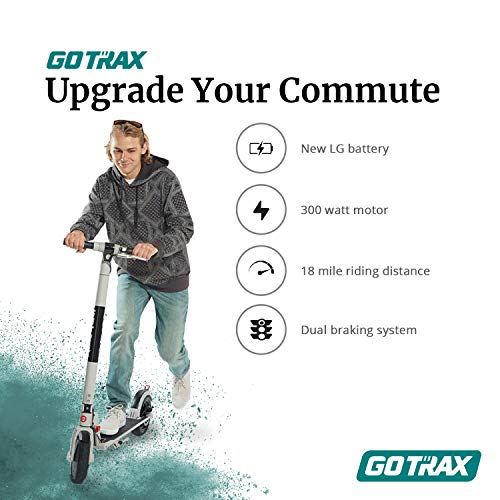 The GoTrax XR Ultra is powered by a 36-volts LG battery with a rating of 7.0 AH. This is a great thing if you’re looking for a highly-capable battery that can bring you to reasonably distant destinations.

LG batteries are also known for being high-quality products in the market as they can hold charges longer than other batteries. They also degrade slower throughout their lifespan.

This means that you’ll have a more reliable scooter you can depend on in the long run. Just make sure that you charge it regularly, and don’t overcharge it as it can ruin the battery’s settings.

XR Ultra’s battery also supports a maximum range of 16 miles for a single charge, which is already high considering that most electric scooters only have 8 to 12 miles range per charge. Usual charge time is around 3 to 4 hours.

The XR Ultra is a fully-capable machine as it’s powered by a 300-watt motor that’s paired with a high-voltage console.

It’s through this that it’s able to generate a massive power of 700 watts, making it capable of going uphills without losing momentum.

You also don’t have to worry if you want to tackle inclines or if you’re going through slightly off road pathways such as light off roads as it can handle these decently well.

This also means that it won’t easily deplete your electric fuel because the motor engine isn’t too bad and doesn’t suck up massive amounts of electric fuel. 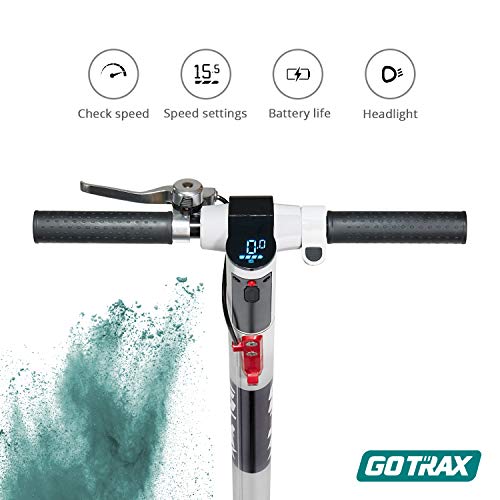 The GoTrax XR Ultra is one of the most user-friendly electric scooters in the market thanks to its interactive and clear console. It displays the scooter’s speed and battery levels accurately, as well as the gear you’re in.

You can also check your scooter’s mileage through the odometer. What makes it even better is that it’s displayed on a LED screen.

The console is even connected to a headlight which can brightly illuminate your path at nighttime. It might not be the brightest one out there, but it’s still good for an electric scooter as it gives you a few meters of visibility ahead on a dark night. 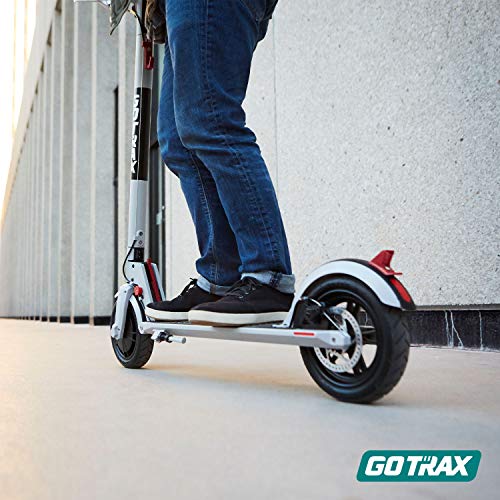 Knowing that this beast can reach blazing speeds of up to 15 mph, which is considerably fast for an electric scooter, it makes perfect sense for it to create a powerful braking system.

Good thing it did just that as it features a dual braking system that ensures you can stop and slow down at your own pace and timing. It’s basically an integration of an electronic brake and handbrake.

The handbrake is connected to the disc brake system located at the back wheel. Meanwhile, the front wheel falls under the electronic braking system.

Disc brakes are now a standard, not only on bicycles, but in electric scooters as well as they provide stronger braking power. They’re also simpler, which makes them easy to maintain.

Also, the breaks have a modulated feel to it. This means that you’re unlikely to get thrown off your scooter once you brake hard because the brake levers modulate the pressure you have onto it.

The XR Ultra is an all-capable machine as its tires measure 8.5 inches. These are pneumatic and air-filled as well, making them light and capable enough to handle cracked roads and small bumps.

And though it lacks a suspension system, its tires can serve as shock absorbers as long as you fill it with a 20 to 25 PSI air pressure. You’ll also find a kickstand on its deck for added convenience. 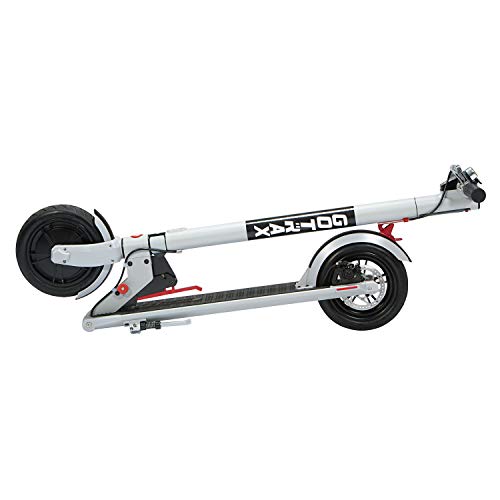 Another nice feature available in the GoTrax XR Ultra is that it’s completely foldable. There’s also a safety pin to ensure that it won’t fold and unfold on its own if you’re using it or if it’s stored somewhere.

GoTrax surely did a lot of research on this feature based on how it’s designed. You can easily see the lever that you’re going to pull if you’ll fold it as it’s colored in bright red.

It’s easy to access as well as there are no parts that cover it. However, the folding and unfolding is a two-handed process.

GOTRAX XR Ultra Electric Scooter, LG Battery 36V/7.0AH Up to 18 Miles Long-range, Powerful 300W Motor & 15.5 MPH, UL Certified Adult E-Scooter for Commuter (Black)
If you have a budget of $400 for an electric scooter, then you’ve got a great deal for your bucks with the GoTrax XR Ultra.
It’s well-designed, built with robust features, and capable of lasting for years with continuous daily commutes. Its controls might be minimal, but they’re fully functional and very useful.
The handling is nice, and the scooter feels solid if you’re riding it. The tires also provide a stable and comfortable ride.
Handlebar length is decent as well, alongside its spacious platform deck. You can even bring it inside the office because it’s light and compact. The scooter is also safe as it has a bell, rear reflectors, and front lights.
If you’re looking for an electric scooter that’ll get the job done at the right price and durability, then it’s surely going to be the GoTrax XR Ultra.